What do you do when your best friend, who lives in Japan, comes back into the country for 10 days? You take two red-eyes to spend the weekend in Hawaii, of course.  Those of you who know J know her story. Those who don't, don't really need to any more than this: Her husband is also in the AF and they are stationed in Japan. She needed to go to Honolulu for some medical appointments. I needed to see her because I miss her face every day. So off I went.

I had been wanting to come see her since I knew they had appointments scheduled. But the problem was it had to be over a weekend. There was so much uncertainty in schedule and T wasn't in a position to try and push for leave at work both because of what he's been working on and because he's going to need a lot of it in the future for life events. She wasn't sure if she'd be there over the weekend - all that depended on what the doctors she saw during the week wanted to do as far as further appointments and follow-ups went. It was a roller coaster for sure, and I really didn't tell anyone what was happening until I was confident that I was going, which was like 10 hours before leaving, haha.

So I slept Friday night on the airplane and landed in Honolulu at 6 in the morning. J & K came to pick me up at the airport and we went to breakfast before heading up to North Shore. We went and saw Turtle Bay (well-known golf course) for K to play a round. I don't golf and J didn't feel like brining her clubs on the trip so we just drove around in the cart. We had coffee and talked golf with K, who I think over all played a pretty good round. It was just nice to be together, and be fairly relaxed since I was running on only a few hours of sleep.  We had hoped that day to see a lot of surfing, but the weather didn't cooperate. We did find this rocky inlet type thing and see some crazy waves crash into it as we were trying to scope out the Pipeline. 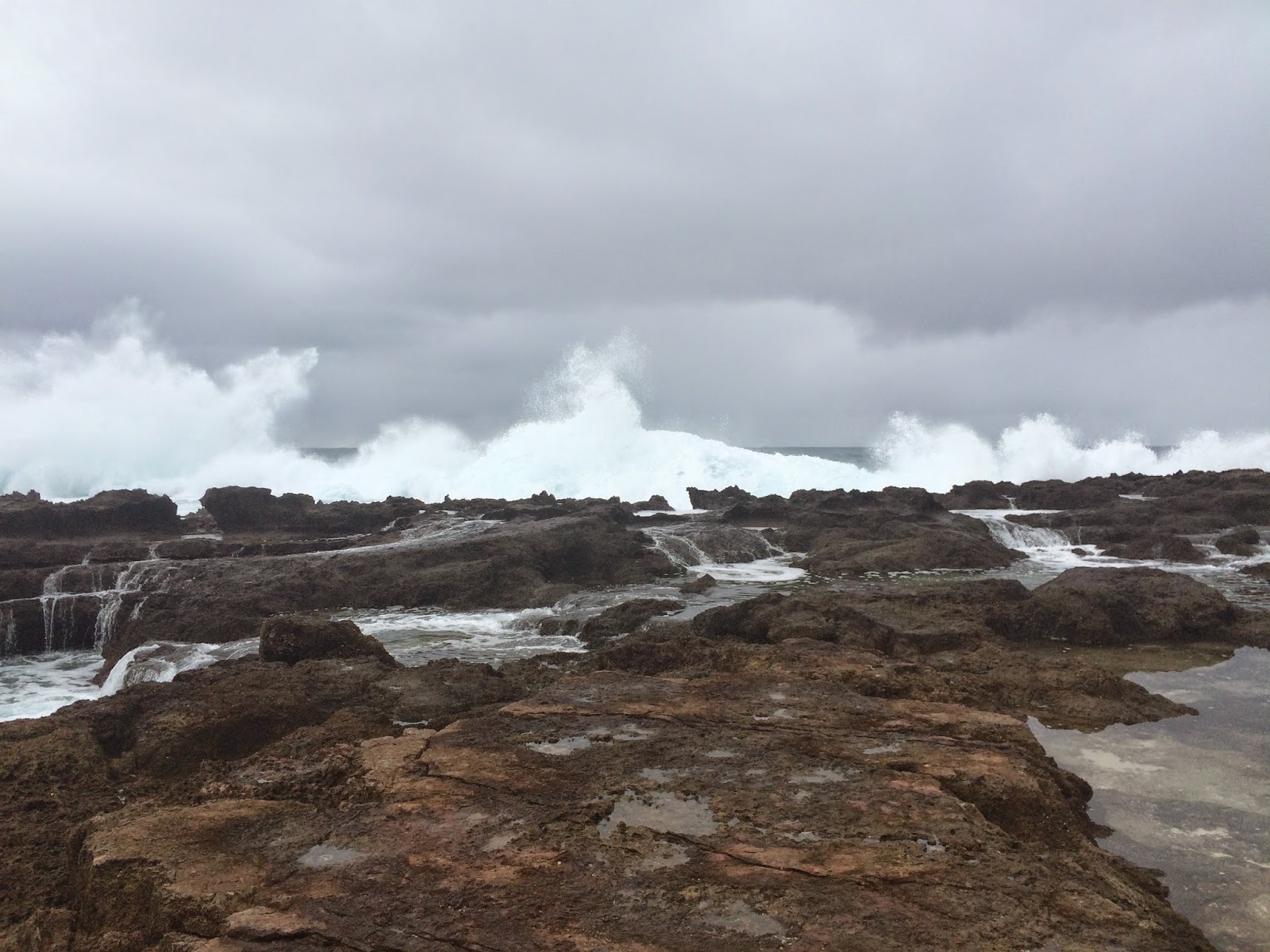 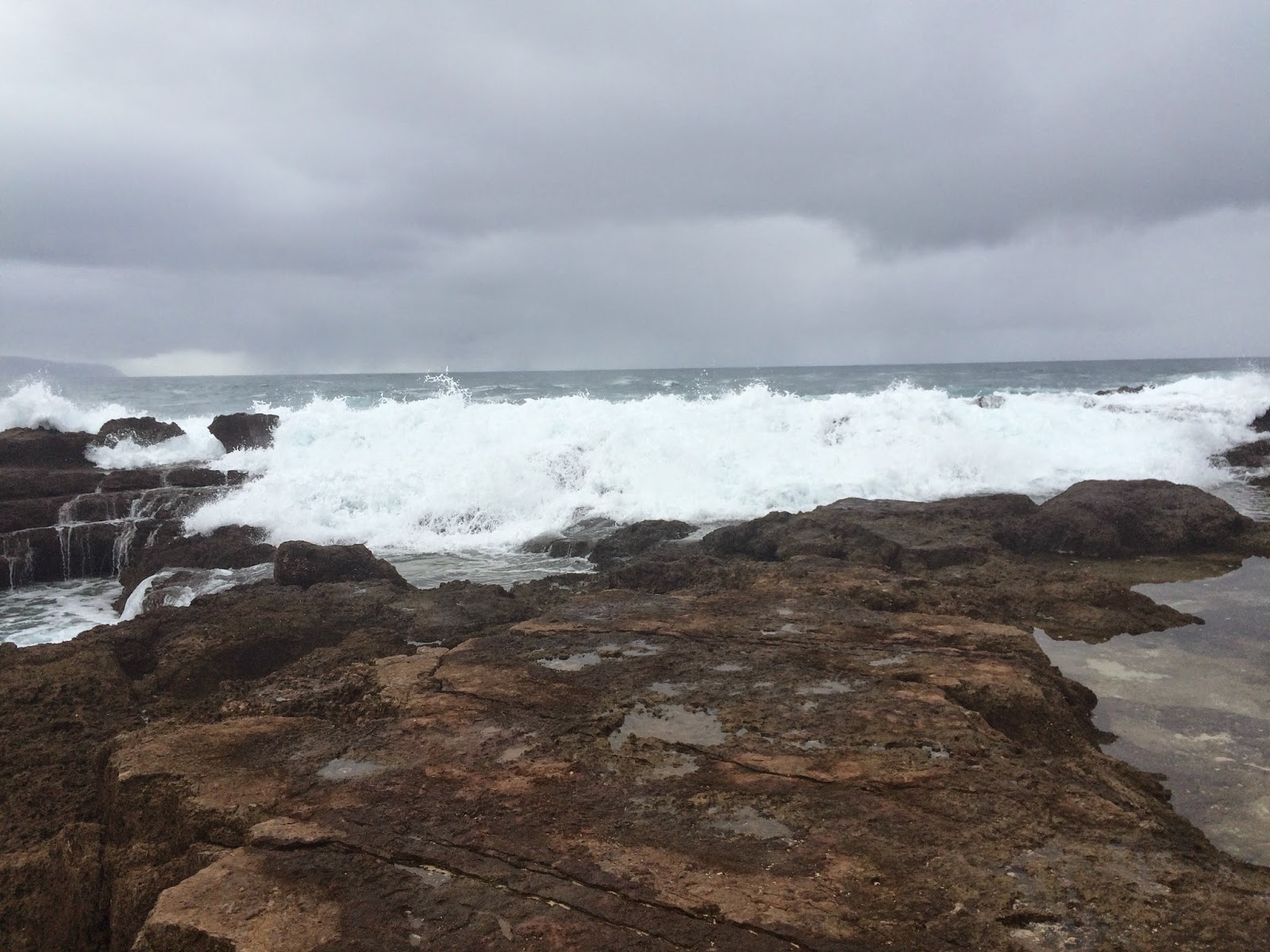 We drove back to the city, got cleaned up and went to dinner.  We tried a modernized Mexican restaurant on a rooftop. The ambiance was pretty cool. The food was fine. There was nothing wrong with it, it just was underwhelming - especially when compared to what we ate on Sunday! 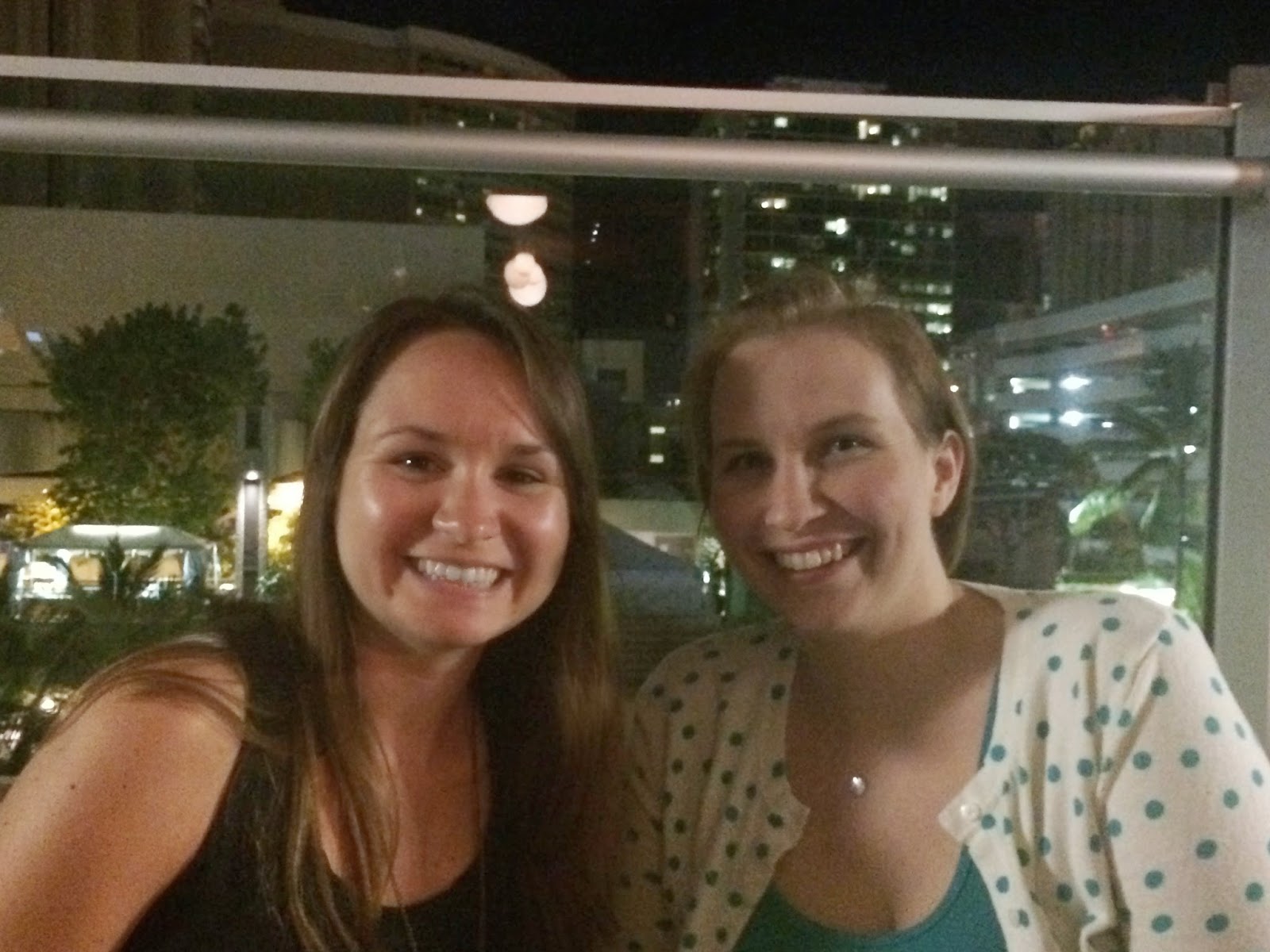 I made it the whole day without a nap! We were all really tired by the time dinner was over and were happy to go to bed to rest up for the next day. I can't remember the last time I fell asleep that fast.

We got up the next morning and packed our stuff to hike up Diamond Head and finish the day in Waikiki on the beach. We started with breakfast. If you are ever on Oahu, please do yourself a favor and eat at Koko Head Cafe. It was unbelievable. We ate brunch like fine dining style - we ordered two plates as starters and then all chose our meals.  Food is important to me, okay? Our "appetizer course" - Breakfast Bruschetta & The Dumpling of the Day. J & I might've ordered a second bruschetta at the end of the meal. . . 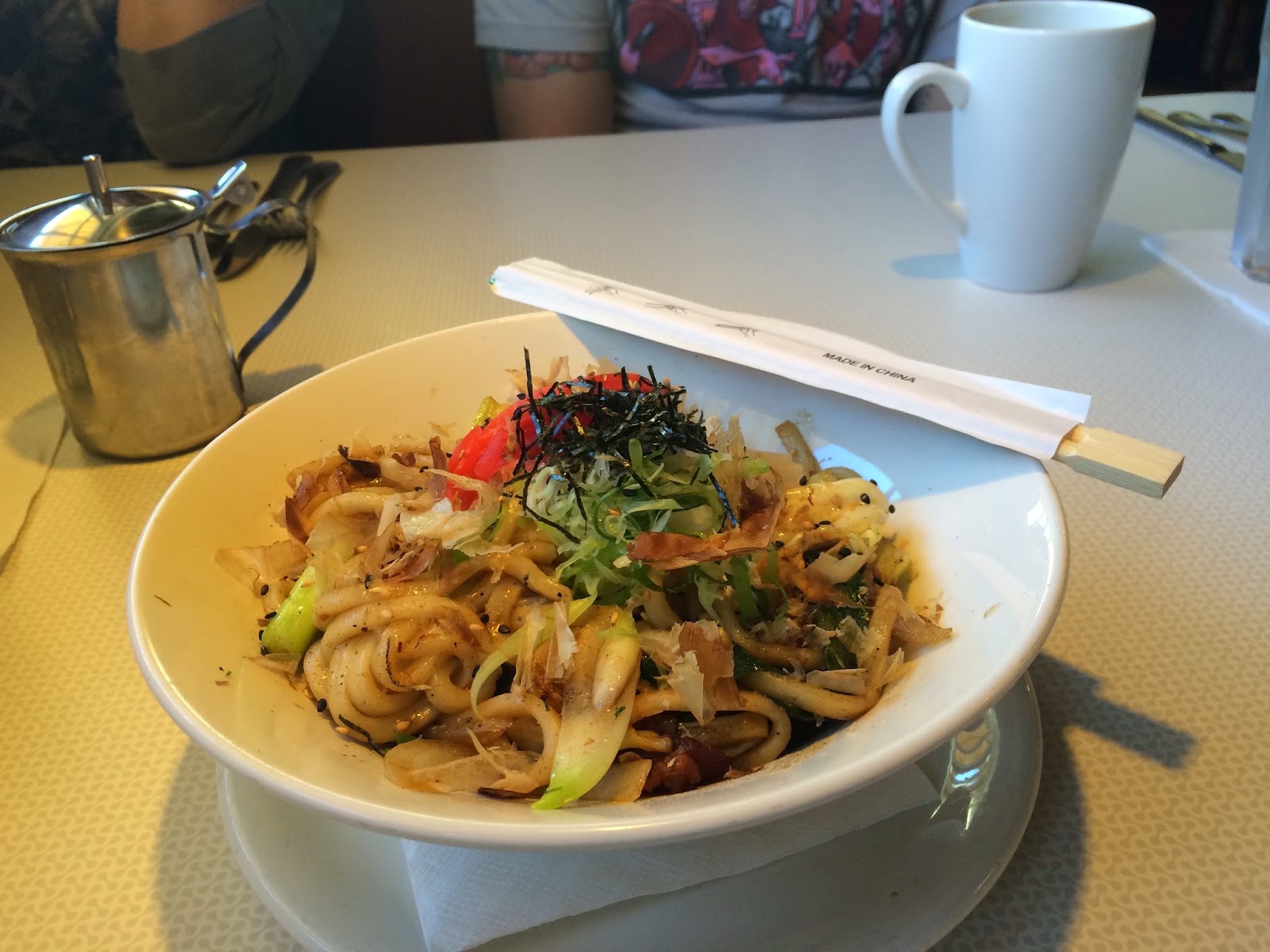 UDON!!! For Breakfast! There is a poached egg on there and bacon.


After really fueling up we went to Diamond Head - which is a volcanic crater on the coast. The hike was pretty short and manageable - although there were some flights of stairs that were beastly.  It was much more crowded than I had anticipated, but the views were beautiful. 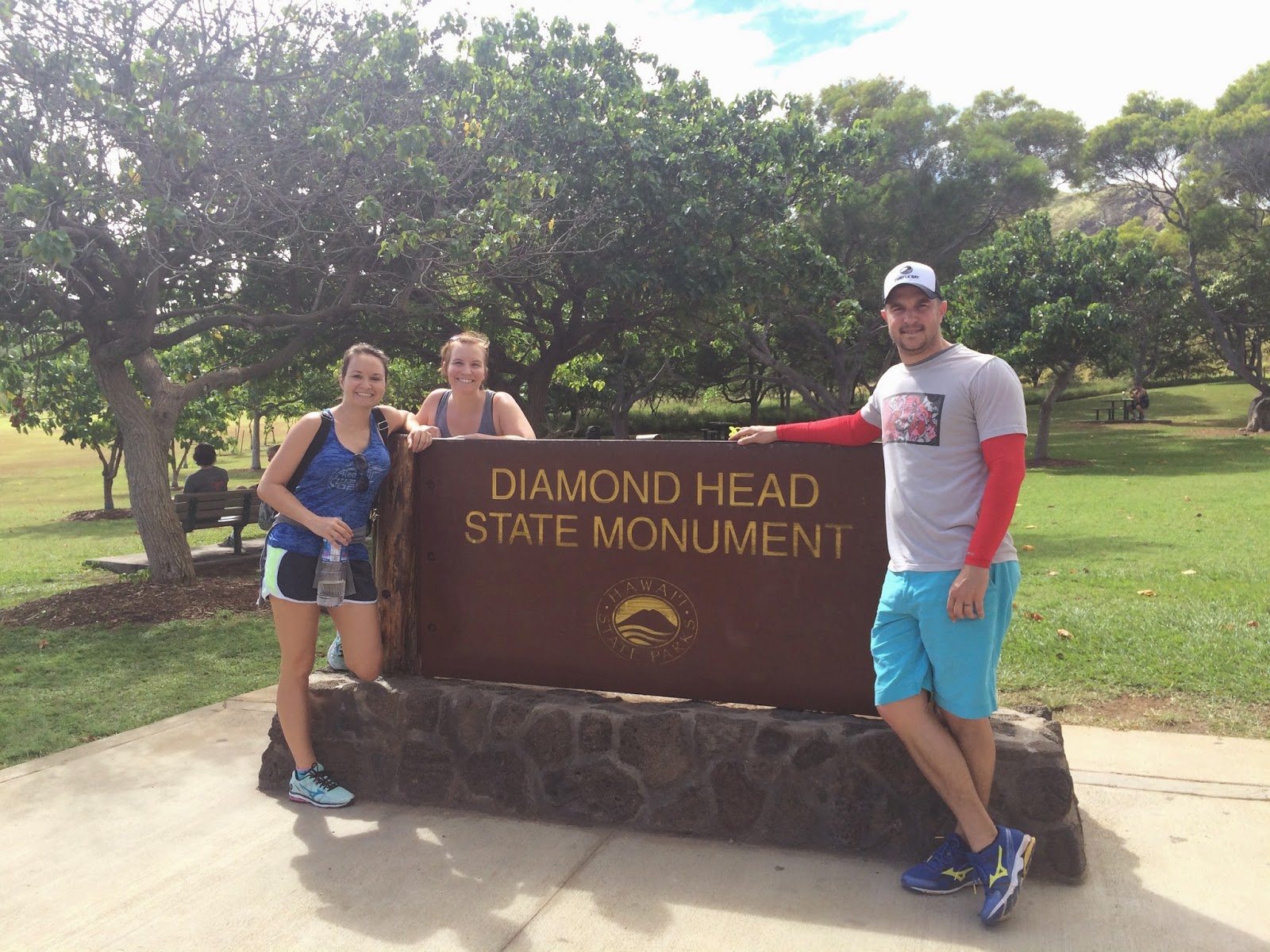 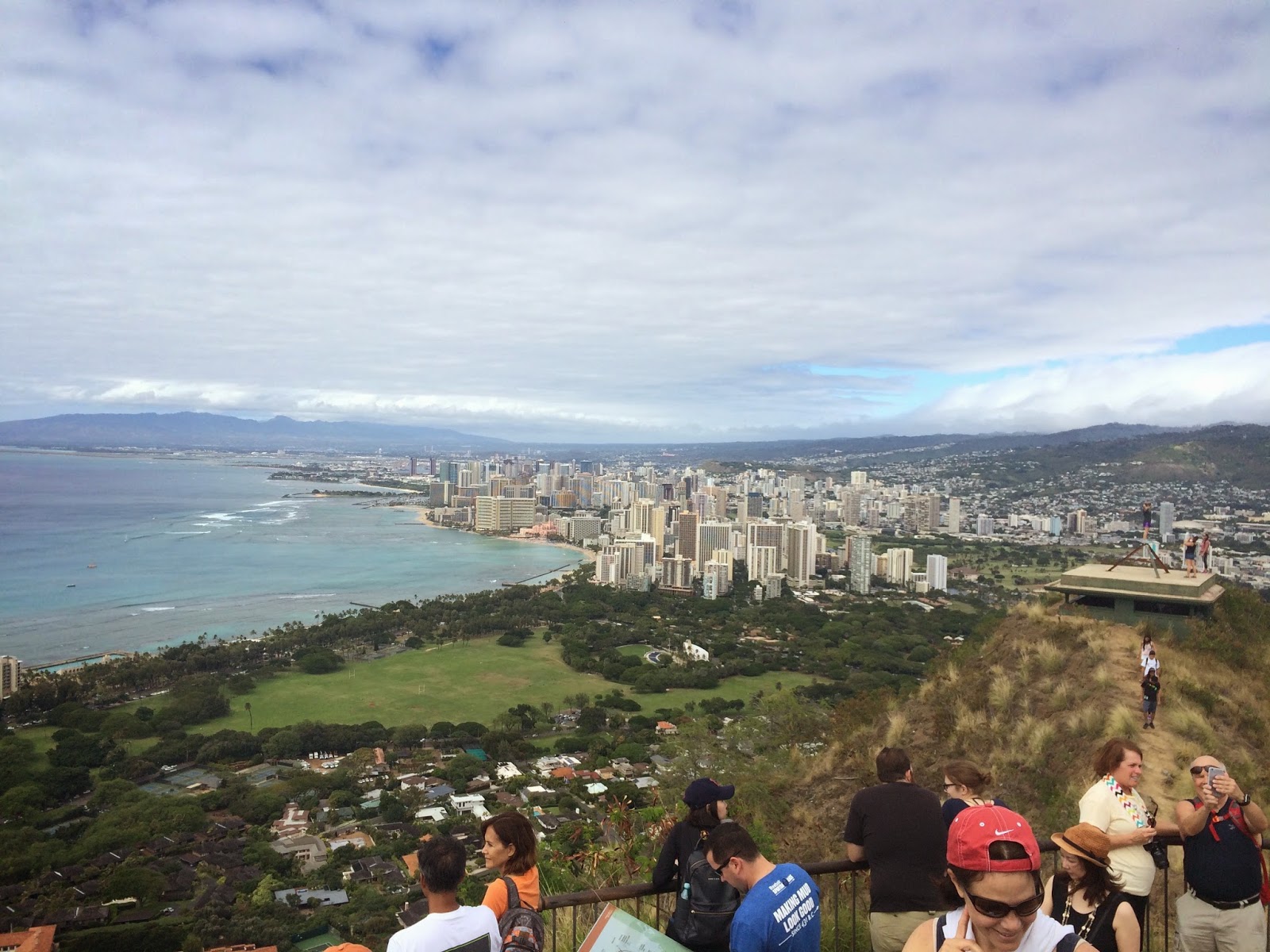 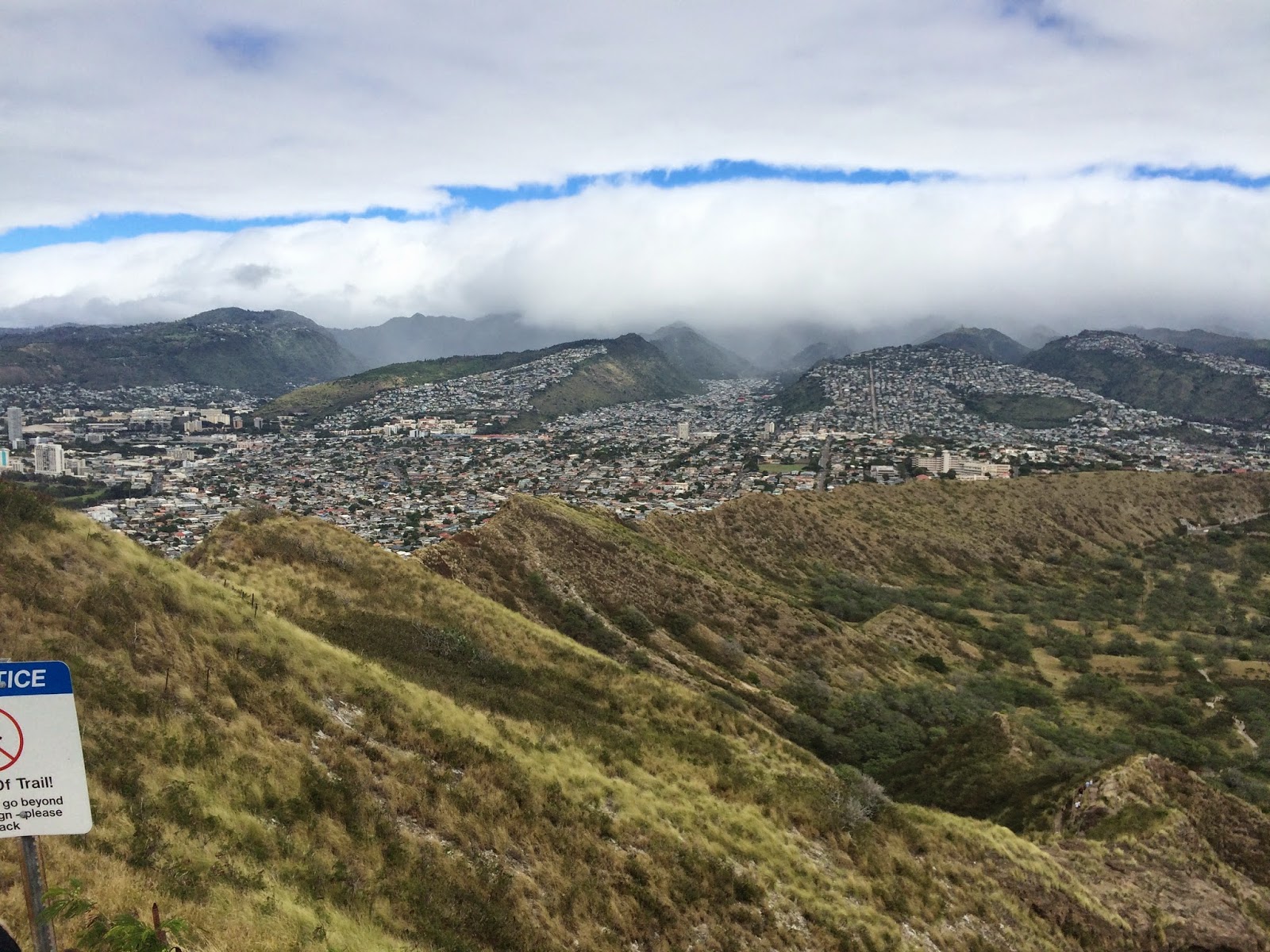 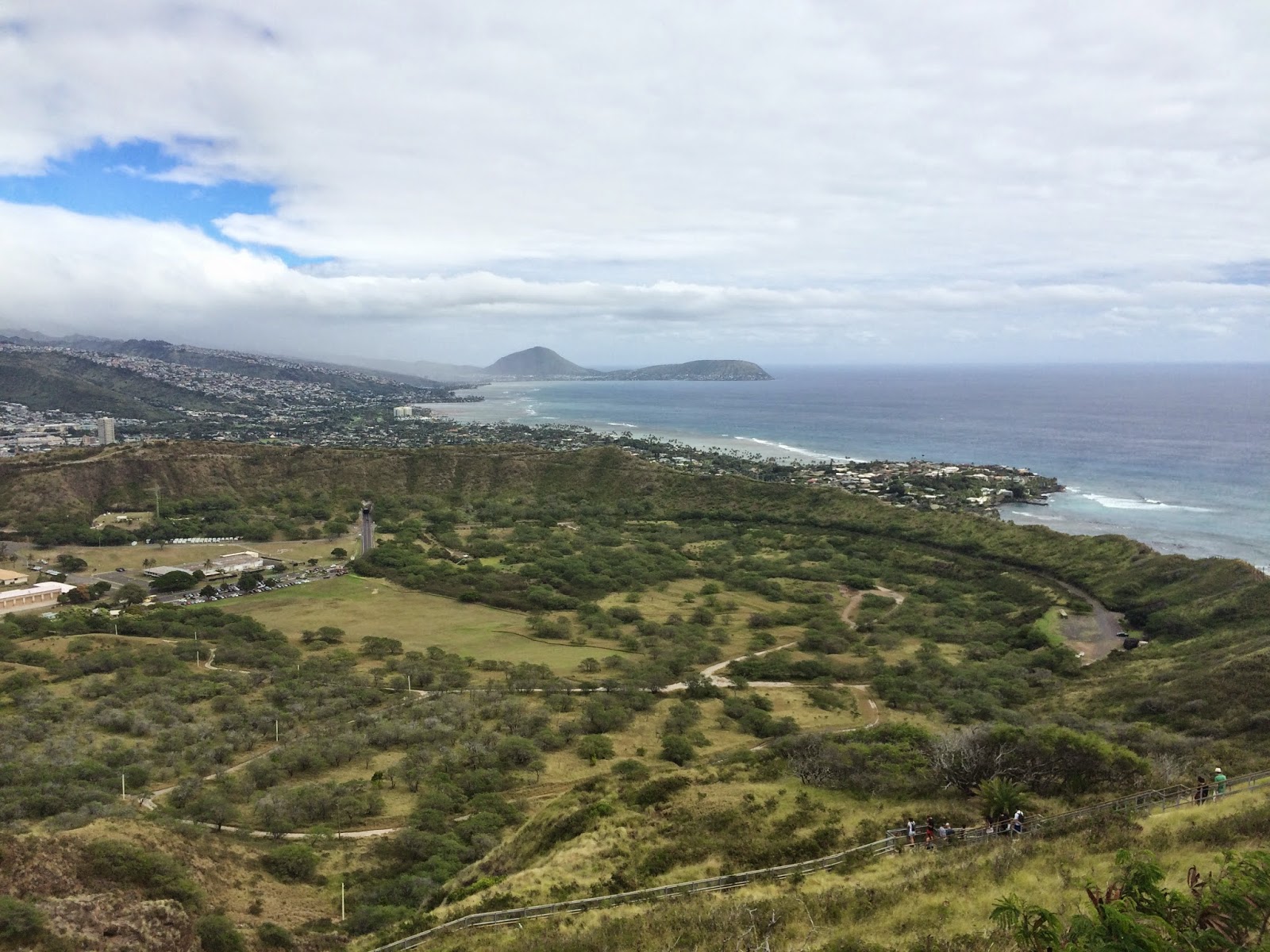 We stopped off to get some snacks & drinks and took a scenic drive along the coast. We were heading to explore the eastern coast and find a less populated beach, but the weather was misty and cloudy so we just finished the drive and headed back to Waikiki. We spent a few hours drinking beer and relaxing on the beach. It was perfect. We went in the water a little bit; we stayed for the sunset. 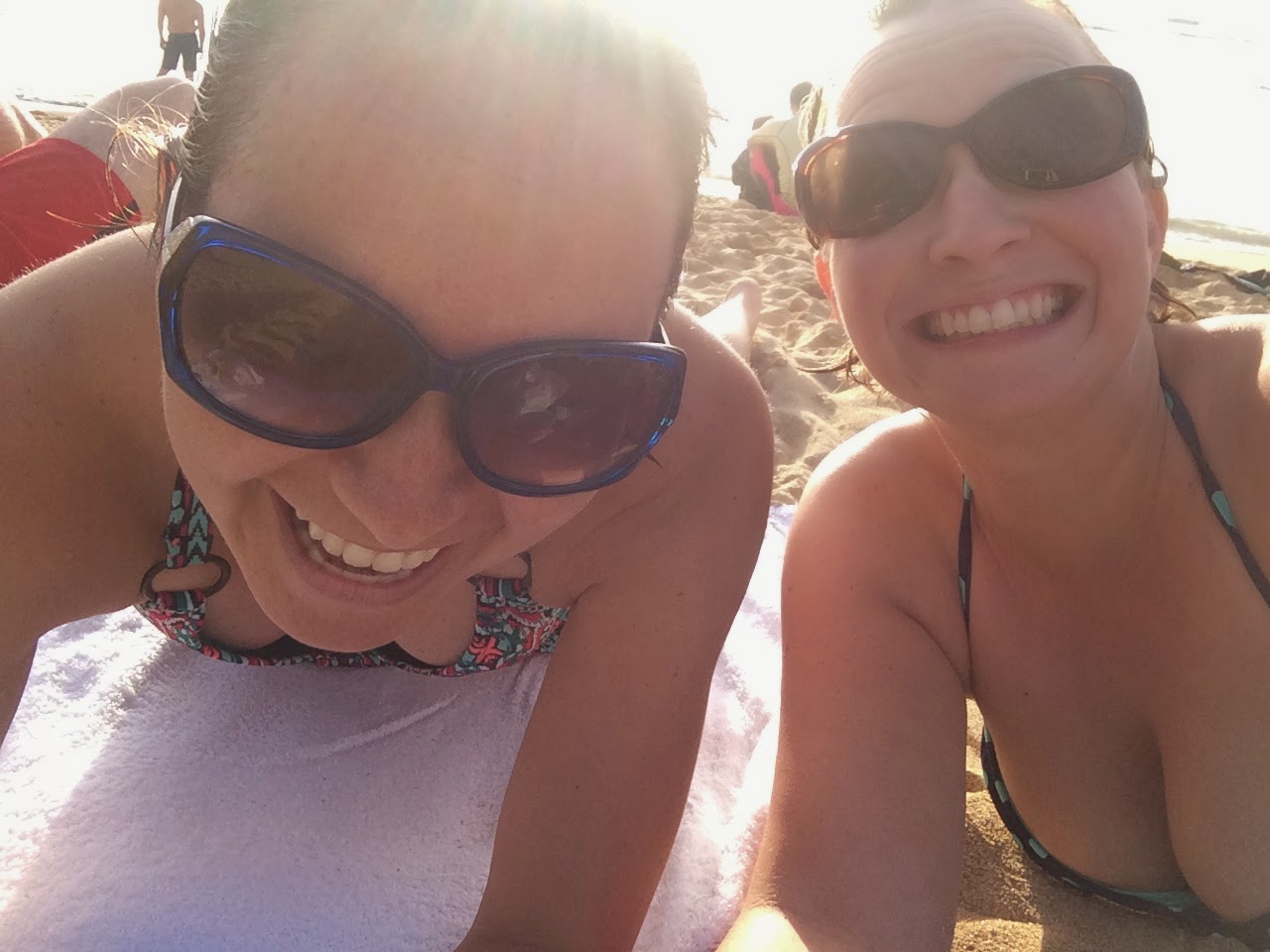 The sun was at a horrible spot for this attempt at a selfie, but I love this pic of J mid-laugh :) 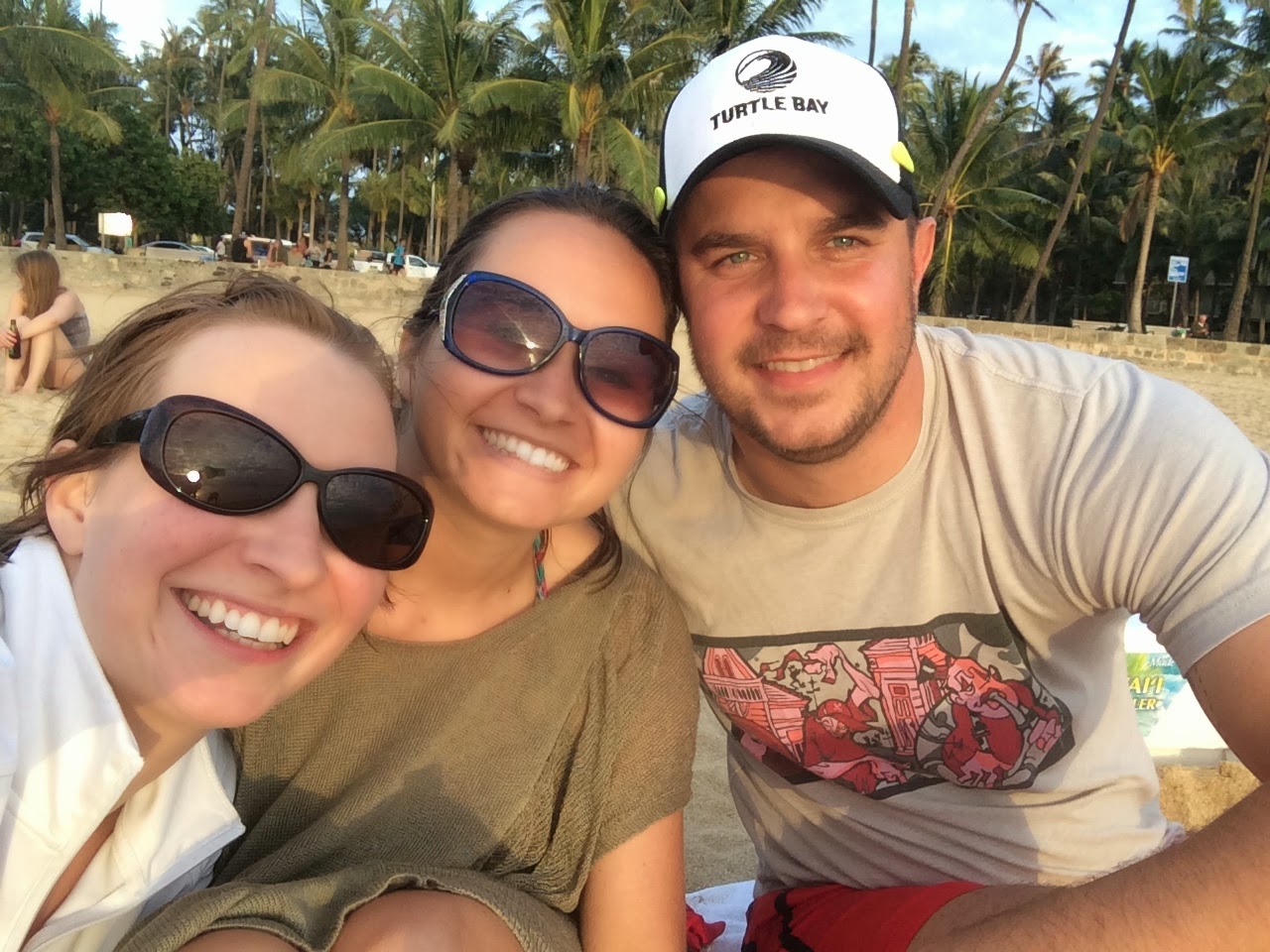 So much love for these two 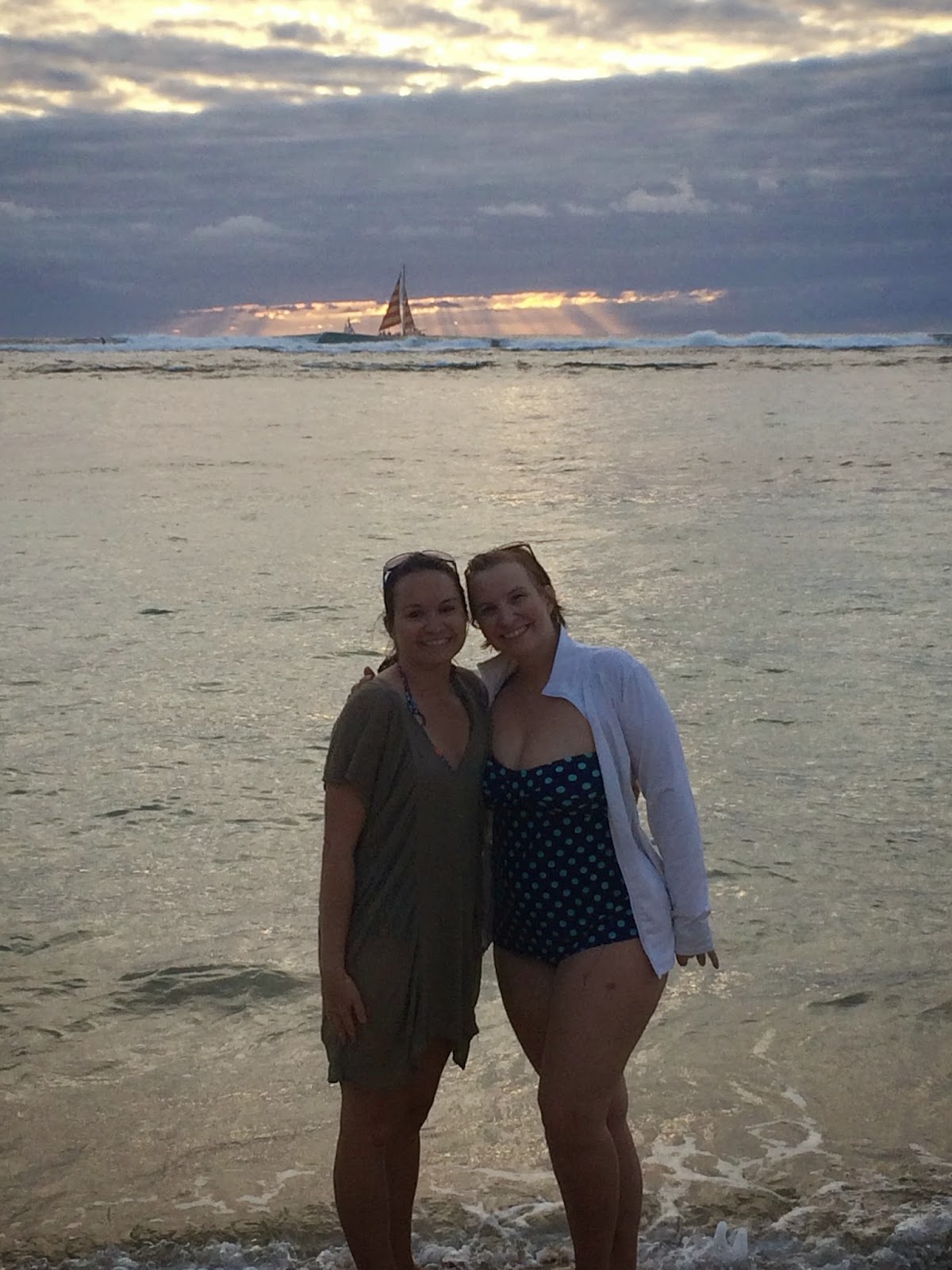 Sunset in the ocean


After the sun went down, we stopped off to have some of the most amazing tacos. Spicy Sesame Poke tacos. I want to eat them all the time. Unf. I told you. I love food. I could've eaten them all night. But it was time to get back, take a shower, pack up, and get back to the airport.

It felt longer than 2 days. We packed a lot of stuff in without feeling run-down or overexerted. I'd love to go back to Hawaii for a vacation some time. Some time when I have approximately eleventy-billion dollars because it's expensive, ha. And I want to eat my way across all the islands.