On Wednesday, June 1 at the ripe hour of 1:30 in the morning, I woke because I thought my water broke. We were told in Lamaze class that when that happens the amount of fluid can be a few tablespoons to a few quarts, so I wasn't sure. I tried to go back to sleep, but my nerves and anticipation made that pretty much impossible. So when T got up for work at 6:30 I told him what happened and we decided that I'd call the hospital and ask. Well they told me that they couldn't actually give me advice over the phone (so why do you have an advice line? I digress . . .) and that I'd have to come in and get checked. I was annoyed because the hospital is like an hour from our house, I was tired and convinced they'd check me out and send me home. I wasn't even feeling contractions for Pete's sake.

So we went. And they hooked me up to the monitors and found out I was indeed contracting. But the OB on duty still wasn't convinced my waters actually broke, that the fluid was something else, and even she thought I'd probably go home. But then tested the sample and it was indeed baby fluid; so it was go time. Due to risk of infection to the baby after waters break, they were required to admit me. Which sucked because I hadn't eaten anything since our light dinner at 7 the night before. I was already starving - but only ice chips and water from now on.

And then I labored. Bored and uncomfortable all day. I tried to go natural - but this hospital's policies turned out to be vastly different from Wright-Patt's and I was required to stay in bed, hooked to monitors and on Pitocin - basically the opposite of my birthplan which was ideally to be mobile and not have artificial hormones to "speed things along". So I made it until about 3:30-4:00 in the afternoon before I gave into the pain and got an epidural. I was on a low dose (I apparently had remarkable leg strength & usage) and refused to push the button to give me a boost of drugs.

The doctor came in after 1 am on June 2 for a check and said it was almost time to push. I only ended up having to push for about 20 minutes. Which, thank God, because I was going over 30 hours with no food and hardly any sleep. If I was one of those women who end up pushing for hours I wouldn't have made it. She came out officially at 1:47am. Baby H was 8 lbs, 3 oz & 20 inches long. T cut the cord and watched as they cleaned her off, did her APGAR, shots, etc. 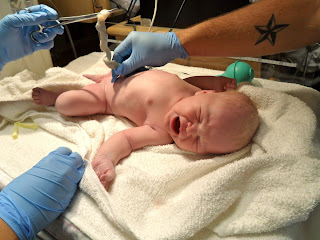 Getting cleaned up and checked out 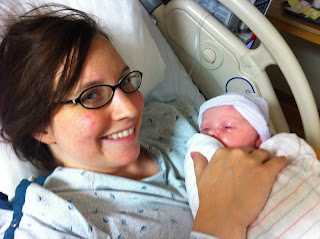 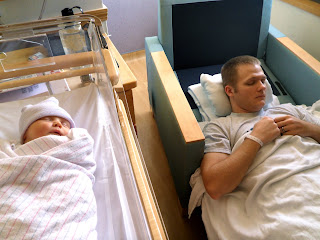 Daddy had a long day, too! 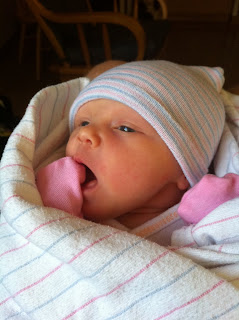 
It's exhausting and painful. And this particular experience was not exactly how we had hoped it would go, but there were no major complications, no fetal distress and most importantly no surgery. So all-in-all I'd say success :).
Email Post
Labels: BABY birth story H's birthday pictures recap