K is for Kansas, good enough for me!

Cookie Monster, anyone? No? :) Anyway, one of the fabulous trips I took to occupy my time was over to the KS to spend some time with my fabulous in-laws! I mainly went to spend girl time with sister K, but how could I be so close and not see the rest of my new family!? Exactly.

We spent most of our time chatting about life and friends over Mexican food or wine, haha. Which was really great because we had never gotten a chance to spend any one-on-one time before, and it's rare that I get to spend time with someone who loves chips & salsa and fountain pop as much as I do :). 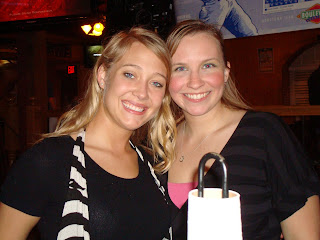 I came in on a Saturday evening, in really crappy weather, so we just went to dinner and came back to talk. We ended up staying up until 4 in the morning! It should not shock you with the late night, and neither of us being morning people, we didn't get moving too quickly in the morning. But we still made it out to Salina by afternoon. Had a fantastic meal cooked for us by the parents and caught up with the visitors who came by the house to see us.

The next morning we got up, had breakfast and got read to go. We were able to stop and bring lunch to the 'rents at school and give one last hug. It went by really fast, but we had trivia night to get to! I was really glad we went, but a lot of K's friends who said they were coming backed out throughout the day and it ended up being just us. We still managed to do well, but we could've used some more help. After we were able to meet up with some of the people who were still in town and go out for a little bit. Coming home I thought we might go to bed early, but we managed to get going again and stayed up until nearly 5 this time!

So now it's already Tuesday! This was our really girly day. We got our nails done and then drove to KC to go shopping (mostly window) at the Plaza. Followed that up with some food and a trivia rematch at Jefferson's. Then we went back to the house and watched a true classic, Labyrinth. Which was quite possibly the best idea and the most fun thing I've done all year, lol. Neither of us had seen it in years and we had a ball. We did manage to get to bed relatively early that night because I had to go to the airport the next morning.

And that's my trip in a nutshell. It was a whirlwind, but I'm so glad that I went. It was really great seeing everyone and spending time with my sister! :)
Email Post
Labels: family recap travel visit