Or 4 because we have Miss Piper and she's definitely family. But regardless of how many this brings our family up to, I'M PREGNANT!!! We are expecting our little bundle in early June 2011. Which puts me at about 17 weeks right now. :)

I've had two check ups - other than the first confirmation visit - and both have been good. The ultrasound appointment had the fetus measuring right on my due date. The last one was just a 'how you feeling/no problems/great' kind of thing and then they checked the heartbeat. Dr. Ruckman had a medical student with her who found the heartbeat right away, but when the doctor came in the baby started hiding from her and she had to chase it all around my belly. 15 weeks old and already a stubborn li'l thing. :)

I've really liked Dr. Ruckman for both my appointments. She was really nice and easy to talk to. But she's leaving so it's on to someone new. It's the only part of this process that I've been a little bummed about, but that's life in the military. Staff on base is always changing, the hospital is no exception. I'm just rolling with it and praying that by the time delivery comes, the doctor on call will be someone I've actually met before.

We go into radiology on Jan. 12th for the "fetal survey" aka a really high-tech ultrasound apparently. I have to down 24 oz of water and not pee until the first part of the exam is over which is going to be so hard. They didn't tell me why that's necessary, but I've gotta do it. I don't know how long it'll take, but they're going to be looking at the brain and all the internal organs and such. I'm amazed at how much they can see and check on today. We are hoping they'll be able to get a clear shot of the gender -- I don't want to hear it, we want to know. People have had really strong opinions about, but if we have the ability to know we really want to. I just worry that it'll be too early to definitively tell or that they won't be able to see. But until we do know we've been referring to him/her as "Ned" to avoid saying "it". Neither of us remember exactly why Ned started, but T in all his USAF acronym glory decided it was perfect to stay standing for Not Entirely Done. Which is totally dorky but also totally cute. :)

Then I've got another quick check up with a nurse practitioner the next day. I'm not sure if she'll even have the results of the survey yet, it's pure coincidence that they were scheduled back to back. The perinatal center gave me a date range of 9 Jan - 30 Jan for radiology to schedule the appointment. T is on night shift again so I asked for an afternoon appointment so he could be sure to come and they said 12 Jan so I took it. He went to the first appointment so he could see Ned too & hear the heartbeat for the first time. But now he only comes for the big stuff -- that was my call, don't think he's inattentive or anything. He's been wonderful. 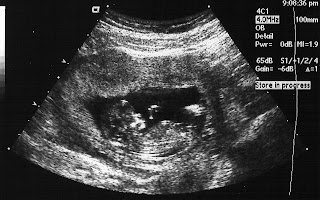