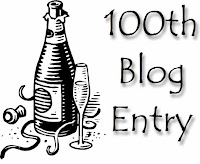 I can't believe I got here!  Although if you think about how long I've had this blog up, 100 is pretty pathetic.  BUT it takes 5 seasons of a standard TV show to reach 100 episodes so there's that.  It's all about perspective. . .


Anyway, I've felt like this post should be celebratory.  It's a milestone for a blog and I want to recognize it.  Unfortunately that means it's been sitting here in edit mode for weeks.  Putting everything else on hold because I can't publish another.  Then this would be 101.  It wasn't really stressing me out, but things are happening in our lives I actually feel like I could share and I can't.  Because this one was in the way.  And the more that happened, the more I struggled, the more it felt like this post had to MEAN SOMETHING.  When I searched for pictures and thought about it, the start was like 'okay no biggie, acknowledge the milestone, make myself laugh and get back to posts'.  But then it lingered.  Taunting me.  Why haven't you finished me yet, blogger?

Then, what to say?  I could talk about this.  Or that.  Or the other thing.  But then all of a sudden it was like but why is X event more special than Y?  Why can't Y be 100th post?  Is it fair?  I have to talk about both kids, I don't want to play favorites.

You get the picture.  Hope you enjoyed the little field trip into my neurosis.  Poor T.  I don't give him enough credit for navigating those pathways.  Usually I focus on how well (read: poorly) he tries.

The point is, getting stuck happens.  And a lot of people get like me where if your stuck long enough you just can't seem to get anything going again.  So I'm going to jump into Yesterday.  Yesterday was a bad day.  Emotionally, more so than actual stuff happening.

B has been having a rough time lately.  I want to say teeth, but it takes so damn long for them to break the surface from the time he actually starts the chewing & the excess drooling I feel like I'm wrong by now.  He's grumpy and constantly signing to eat but the refuses to eat anything we put down.  Even fruit lately.  So he's perpetually hungry, but not understanding he's the problem.  He's regularly on 1 nap per day.  But half the time he's choosing to make it 1hr or less.  So he's always tired, but not understanding he can also solve that problem.  There is a swell under his gums so there's got to be some pain some of the times.  And I know growing pains and all that.  The point is I don't know.  So I can't fix it.  And it's making me crazy.

H is 2.  Terrible Twos.  Enough said.  She really is a great kid.  But she's also sassy.  And defiant.  And bossy.  And pretty much anyone who's seen her a few times knows she can throw a tantrum like nobody's business.  Plus she loves me and that's awesome but she wants my attention.  All. The. Time.

T's hard drive crashed and lost some of our financial records, so after lunch I was trying to replace the last few weeks worth of stuff.  The kids were fine, as usual, until I need to focus on something else.  At 12:45pm, our playroom consisted of B bawling a foot away from me, me lying on the floor sobbing, and H crying while saying "Mommy, you need to calm down".  I scared her.  She told me all the things we tell her.  She told me to take a breath.  She told me I could go in the other room. I started to control myself and she said, "mommy I kiss you and you be happy."  Which only made me cry harder because it was so sweet and so so sad.

And then the I'm a terrible mom overwhelmed me. I lost my patience. I can't seem to comfort my son no matter what I try.  And I scared my daughter.  How do you move on from that?  How do you just pick them up and pretend like you didn't just lose your s-h-i-t?

By 12:50 we were all huddled in a snot-covered hugball in the middle of the playroom.

I think they've moved on, but I'm not sure I have.  I want to shrug it off and say "tomorrow is another day".  But I'm stuck. I want to be perfect for them. And I can't. And then I feel guilty that I can't.