We began the festivities this year by meeting the Clark side in Kansas City. Being grown ups with jobs and such makes it very difficult to get together, but we did our best with what we had. We really wanted to get out that way ASAP so we could share the good news in person. 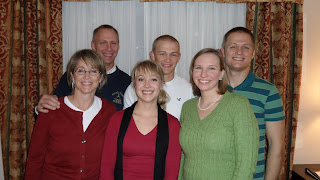 Group shot, thanks to Brittany for taking the picture :)

We were able to start the day by meeting Grandma & Grandpa Allen at Granite City at the Kansas Speedway for lunch. It was delicious, of course, and full of good conversation. I let T be in charge of dropping the news, but when lunch was more than half over w/o him saying anything I kind of steered the conversation in that direction :).

Then we met up with Mom & Dad and decided to check out the Power & Light District while we waited for K to get off work and for D & Brittany to make it up after his flight landed. We ended up bowling which was really fun!! I hadn't bowled in years, and neither had anyone else it seemed. We were all pretty evenly matched but I was super excited, I won by one pin! :)

K got off work and we headed out to the AMC theatre to enjoy the "fork & screen" service where you watch a movie while eating & drinking. It was pretty much the most amazing idea I've ever seen. We were going to see "How Do You Know" with Paul Rudd, Owen Wilson & Reese Witherspoon but there weren't 5 seats together so we ended up at "Tron: Legacy". From what I hear, it was a blessing because no one I know has given "How Do You Know" a positive review, haha.

After the movie, everyone was finally in town & we went to the hotel to give everyone our gifts. Which, incidentally, was the most important part of our weekend because it's how we planned on telling everyone. 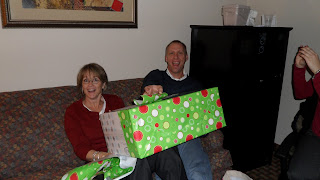 The moment they figured out what exactly it was. . . 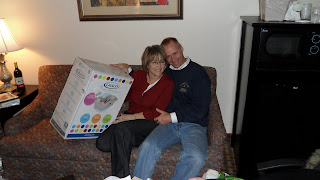 We hung out talking, playing Blokus, sending the boys to find some fountain pop, you know the usual, for the rest of the night. The next morning we basically had time for mass and then we had to get back to the airport to return the rental car and check our bag for our flight home. It was a whirlwind, but very much worth it. We of course wish we had been able to spend more time and even make it down to Salina to be able to see more family & friends but hopefully we'll be back soon when T is done with this strict rotation and can actually take leave for more than two consecutive days.

Actual Christmas wasn't exactly as tradition calls for, again due to the NOAC job, but fortunately we were able to drive up and do most things with the Johnson side. My 95 year old diabetic grandmother was actually feeling up to spending a night away from the nursing home and joined us which was fantastic! Dad & T went down to pick her up Christmas Eve morning. We all went to the usual 4 o'clock mass that evening before coming home to do eating & presents. In addition to GG, we had another special treat - Kay joined us for church. She has always come over on Christmas Eve after gifts, but this year she was around for all of it! :) 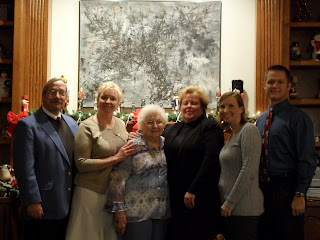 I was too busy opening presents and making sure the dogs (we had 4 there that night) didn't get into them to take any other pictures, but I made sure to get everyone in their nice clothes before the comfys came out, haha. The girls finished the night by playing cards which is grandma's favorite thing. Mom & I were euchre partners and we took Kay & Grandma for 70 cents in three games :). T used his new whirley pop and popcorn oils/seasonings to make delicious movie theatre style popcorn for everyone.

Christmas morning, my dad's sister, Aunt Barbie, came over and made french toast - another tradition. Usually we'd see the other members of my dad's family but they stayed in Michigan this year. We wouldn't have seen them anyway because we had to leave pretty much right after breakfast so T could get changed and get into work. We made it home, T spent the night at the NOAC and I watched Elf with Piper before going to bed.

All in all, our holiday was good. We made the best of the work schedule and crammed in everything we could when we could. I know I got crazy spoiled by everyone, which I suppose is very appropriate as a last hurrah of sorts seeing as how come June I will forever come second to our adorable baby :).
Email Post
Labels: christmas family holidays recap travel