Last week we had our ultrasound. So far so good, baby is growing nicely! :)

The first part of the test - the reason I had to chug & hold so much water - was checking on the baby's environment, making sure it's giving her enough room, that the fluid levels are good, etc. The weather was bad that day so we ended up getting to the appointment early and I had finished the water beforehand so I was bursting before they even called me back, but I made it.

The rest of the exam was all about getting measurements of li'l Ned. For a while in the beginning, the tech was thinking we were going to have to come back because she was not cooperating. She wouldn't take her hand away from her head which was inhibiting the brain & head measurements. But eventually we knocked it away and got enough information to satisfy the tech. 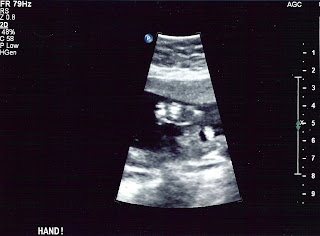 The tech took a picture of her hand since it kept getting in the way; she thought Ned must want us to take a good look, hehe. That was actually a really cool moment though because we got to see her face. She was trying to catch her hand in her mouth. I won't lie, the image was creepy, but all together amazing at the same time.

She's a little pudge already though, apparently. She was measuring pretty much right on 19 weeks for everything except her belly which is already measuring at 20 :). There didn't seem to be anything to worry about with that, though. And according to Monica on "Friends" it's good for the baby to "come out all cute and fat".

I do use the pronoun "she" because even though the stubborn kid had legs completely closed when they were trying to see the few glimpses two different techs got made them both independently guess girl. So that combined with the nurse's prediction from the 12 week exam, has given us relative confidence she's a girl. 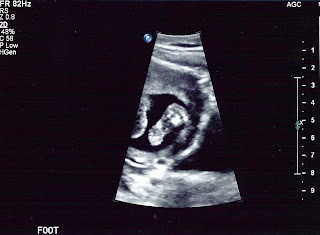 And I've got a feeling she's going to take after her momma's love for shoes because her foot was the only body part she was more than willing to show and pose for. I took it to mean, "size me up mommy I'm gonna need some cute shoes when I get outta here" :)


This is the best profile shot we could get: 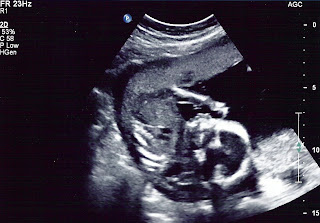 As you can see, hand up by her face. We're actually looking at her from the left and that's the back of her right hand against her head. She's clearly done with the paparazzi.
Email Post
Labels: BABY dr appointment Ned pictures recap ultrasound