Last Saturday we had our first of two baby showers! This one was up in Perrysburg with my side of the family & friends. It was at my cousin's house which was so fun. The men went down in the basement to drink beer & watch the NCAA basketball on their big screens while the ladies did the classy shower thing :).

We ate lunch - Qdoba burritos, yummies in my tummy, and then we played two games. One was naming all the songs you could think of that have "baby" in the lyrics and the other was a baby themed scategories. Followed by delicious cake and gifts. All of that stuff took a shocking amount of time so then people pretty much dispersed and it became one big basketball watching party which was fun. Mom tried to make the gift opening part - my least favorite of showers - interesting for people involved by turning it into a raffle. When people brought in gifts she & Kat put numbers on them and every so often a timer would go off and whoever had the number that matched the one on the gift I was currently opening got a prize. The only "game", if you can call it that, that the boys played was a pool for the baby's birth date. We made a calendar and they got to choose one date for $1. Whoever guessed the right day will get the money when she comes out. That was the extent of the baby talk I'm sure they did all afternoon, haha.

The highlight of creativity, however, was the "shoe cake". They took the traditional concept of a diaper cake and tailored it much more to my tastes :). They also used little baby shoes to anchor balloons all around the room. It was such a surprise and it was so awesome!! Although, I'll be honest, when I was packing all the shoes up to go home I was starting to get a little jealous that the baby's shoe collection was already starting to rival my own and she's not even out yet! O:-) 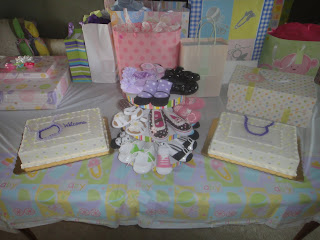 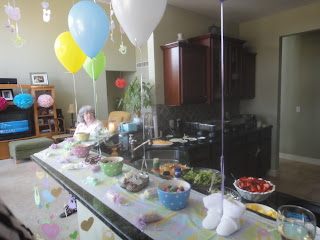 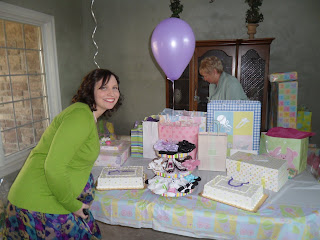