Baby B is eating solid foods!  We started him on infant cereal at 5 months and he took it like a champ!  I think partly because he took to eating so well and then mostly because I'm not as neurotic this time around, we quickly moved to the actual foods as well. 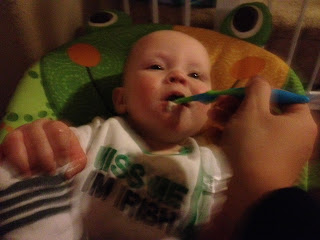 sorry these two are blurry, T wasn't home and I wasn't so steady doing both 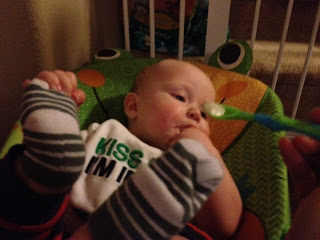 The first bites went down with me giving him his paci, after that he started using his own fingers to suck and help him swallow.  Clever boy.

He started baby food with carrots, which took a lot of mixing with cereal/formula to get him to eat.  Then it was only the first feeding of peas he spit out adjusting to the change.  He's now on pears/apples with cinnamon.  That change was not an issue for him :).  We've got sweet potato, banana & avocado coming up.  Then I think it'll be on to the more flavorful concoctions - beyond choose one food, steam & puree. 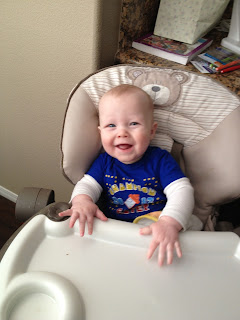 Bring it on, I'm living up to my shirt (champion eater) 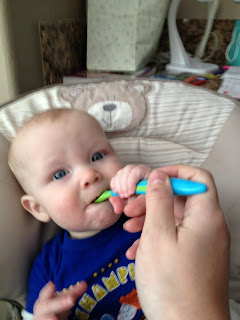 I got this now, momma.


I make my own baby food.  Not because I'm a hippie or uppity or think that jarred baby food is evil.  I just have the time.  I wanted to try it when we had H, and it turns out it's not that hard.  That's not to say when we run out of the batches I have frozen and it's time to go to the store and make another 1-2 months worth I'm not all "THIS IS IMPOSSIBLE, WHYYYYY CAN'T WE JUST BUY IT????" :)  To do it in batches is a lot of work.  It's pretty much an entire day.  But I think it's worth it.  Jarred baby food isn't unhealthy, but this way it's fresher.  And we've used the jars for convenience when traveling.  But homemade tastes better and like I said, I usually have the time.

It's not for everybody, but if you're interested in it, give it a try.  I have two recipe books if you need help with where to start.
Email Post
Labels: baby food feeding parenting pictures solid foods the dude