TL;DR - this is basically a diary entry covering the 6 days we drove to KS and back.  It's probably pretty boring 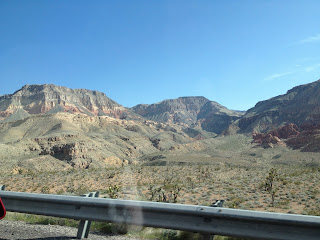 We began a near 1200 mile journey on Saturday March 16th.  T had just come back from a TDY and so our goal was to leave around nap time and get a few hours underway, stopping in Utah.  Day 1 was not bad.  It was short (comparatively), the kids slept decently, and no one got too cranky until about 30 minutes from stopping. 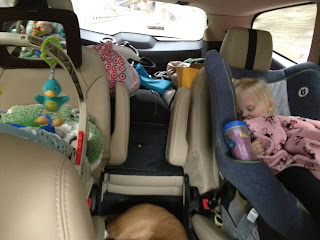 day one full of excitement and napping babies

We ordered a Pizza and took the kids swimming in the indoor pool (a must for energetic kids stuck in the car for hours).  It wore them out, but not quite enough.  Well B was tired.  But H was WIDE awake.  And we're all in one room so that was difficult.  T & I were sitting silently in the bed, in the dark, reading things on our iPads while we listened to her babble and sing until almost 11.

Day 2 was the worst.  It didn't start out that way, but it took a turn in the mountains.  We got a little bit later start that I had wanted, but we were still on track to hit Denver in the late afternoon.  I chose a hotel on the south side of the city.  I mapped out parks.  We were going to play outside!  We were going to stop by Ikea!  We were going to go out to dinner!  Fabulous, right? 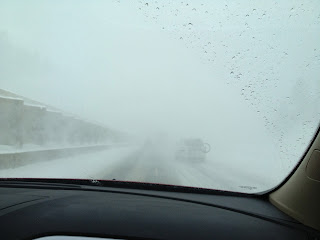 But a snowstorm hit the Rockies.  And due to weather conditions and an accident we were stuck in traffic for hours. 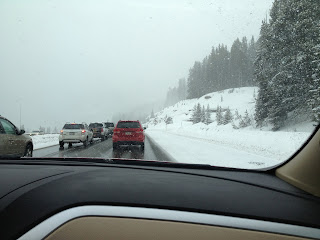 Our 7 hour drive turned into I think around 10 or 11.  We got to Centennial, CO around 7pm.  We were starving.  There had been countless tantrums by both kids.  H at one point in the traffic jam said "peas mommy, all done car".  You & me both, sister.  There was a Chili's down the road from the hotel so I called to order some carside to-go.  We picked it up, checked in, let the kids mill about for about an hour and pushed 'em to bed.  In our room right above the entrance so we heard everyone come and go both talking and the doors sliding open and shut.  All night.  I guess pet "friendly" room means pet "get the short end of the stick be lucky your dog isn't sleeping in the car" room. 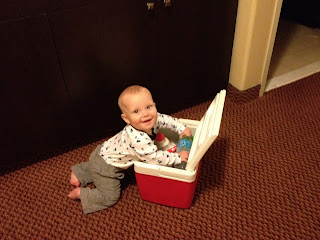 B beat us to the cooler; it was a long day for everybody ;)

Day 3!  It was a new day.  And we'd be reaching family, huzzah!  I'm now about a month removed from the situation so given that I can't remember anything being too terrible, I'm guessing it went fine.  Tiring, I'm sure, but fine.  I remember we stopped at a Subway for lunch just before the KS border because there's not a whole lot in western Kansas.  We survived and the joy of seeing our loved ones is what fills the memories for that day.  And wine :). 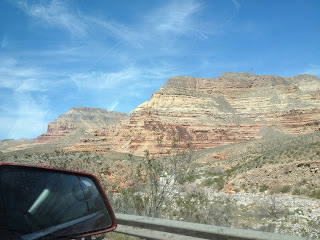 And after a very nice trip, eventually we had to return home.  We actually decided to make the same stops.  I thought maybe we'd break it up differently, but since we didn't go to Ikea and I wanted some small things for around the house you can't get online we went back to Denver.  It was only half successful and took longer that anticipated.  And of course there's the obligatory Ikea fight that every couple has.  It's a law when entering that store.
When we checked into our hotel, even though it was just before the check-in time of 4pm - i'm talking minutes - housekeeping was still in our room.  They had just started and we had both kids and the dog out of the car.  She said it would be a least 20 more minutes.  So the front desk apologized and gave us a new room.  A new UPGRADED room.  We got a 2-bedroom suite!  To be fair, we were staying in an Staybridge extended stay suite hotel so all rooms had a mini kitchen and a separate bedroom.  But still, we got 2 and a full kitchen!  It was nice to put the kids to bed in their own room and still be able to leave, watch TV, have lights on, pack, etc.  And also to not have to sleep on the couch.
The problem with that was when the guy at the front desk did it, he did NOT mark the switch in the computer.  Or if he did, it didn't take.  So T went out to gas up the car and buy more milk to save time in the morning.  I'm in bed reading and watching the voice and I hear people outside our door.  Then I hear the key swipe.  Pipe ran to the door and thank God for her.  It spooked the people enough to shut the door.  I opened it a crack and told them we were in here.  I don't know what the people were expecting but they just kind of looked at me. I had told them that the desk had moved us at check-in because our room wasn't ready.  I know it's a weird situation but they just stared and the one was adamant that this was their room.  They had their suitcases with them so they were just checking in.  So finally I was like "I really don't know what to tell you, but I've got two sleeping babies in here so we're not moving.  I suggest you go to the front desk to get a new room".  The front desk called up, which thankfully I was anticipating and answered on the first ring as to not wake the munchkins.  She apologized for the mix-up and fortunately there was a woman down there who was present when the day manager upgraded us to vouch for the situation and we didn't have any more troubles. 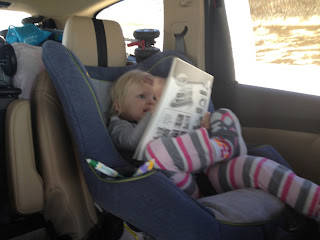 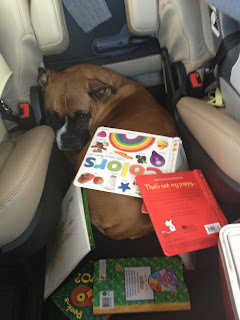 . . . unfortunately for Pipe, so did throwing books on the dog


Day 2, another long haul back across the mountains, but lucky for us the weather was much better.  We stopped somewhere in Utah after naps and found a local park.  Piper got out, H got to play on a playground, B got his bottle & some face time with us.  We made it to our hotel in time to go out for dinner.  We still went swimming.  Well I took H swimming.  B & T were supposed to join us after B finished his bottle.  But it took them forever and they were only there for like 10 minutes.  But it was the same situation as before, one room.  So we went back, put the kids to bed, and sat in the dark until we went to sleep. 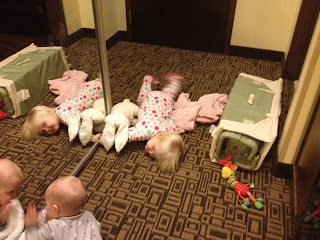 This time she was tired and we couldn't set up her bed until T came back in from letting Piper out for the night.  She was going night night anyway, apparently.


The advantage of our same stops was that on our last day, we only had about 5 hours to go.  We stopped for lunch at a McDonald's with a playplace so the kids could spend a little energy.  They fell asleep shortly after and napped until we were home.  It felt so good to be home.