A major event that I just sort of skipped over was B's birth!  Now, not everyone thinks that makes for good conversation, but in keeping things fair I told H's story here.  Last time there were no gory details, which I promised up front.  I'm sticking to that promise. . .  mostly.  But just how you shave your legs before every doctor's visit the first time, you care a little bit less with the next one.

It was Sunday, Aug 5th.  My mom was arriving on Tuesday so she could be with H when it happened.  My due date was the 12th.  And at my check-up a couple days before I wasn't even close!  The doctor started discussing their induction policy for late babies -- this is how not even started I was.

A little after 3 in the morning, I woke up, groggy, but really really feeling like I was going to pee myself.  So I made it to the bathroom.  But it felt different.  I remind you with Hailey, my water breaking was a tiny leak.  I wasn't even sure it had broken 5 hours later when we went to the hospital. So I tried to stop.  Advice from our Lamaze coach the first time was try to stop the flow.  If you can, your water is probably not breaking.  And I could.  Phew! False alarm.

False false alarm.  I'm just about back at the bed (in our tiny TLF, remember?) and it's like it happens in the movies.  T woke up pissed at Piper because he thought she was having an accident on the floor.  So we call fellow classmates who very generously offered to come take care of H if anything happened before my mom got there.  They came to our room with pillows.  Stephen was very happy the bed was still safe for sleeping, haha.

We got to the hospital and it was so much better than Wilford Hall.  They encouraged everything I felt comfortable doing instead of strapping me to the bed.  They did come in to monitor baby & my vitals once per hour.  But the rest of the time I was allowed to walk, use the birthing ball, use the shower, etc.  I was already in a better place.  Maybe it was because one of the midwives (Mary) was on duty instead of the doctors, I don't know.  I really liked Dr. Montoya at all my checkups, but in general midwives tend to have a more free-spirited approach to labor.

I wanted to try to go without medication, as was my wish before, but was unable to with H.  I had hoped without the Pitocin intervention & the freedom to practice what we had learned in Lamaze I could handle it this time.  Plus they say 2nd babies come more quickly.  When things got harder & toward the end of Active Labor they told me to come get them if I felt the urge to push.  I did.  They checked me.  7cm.

I held out for a little while longer and had them check again. 9cm.  They stayed in the room.  It was only going to be a few more contractions.  Hang in there.  At this point it was time for T to shut up because how in the ever living hell did he know if I was doing a good job?  The nurse & midwife were much more qualified to tell me that.  4-5 awful contractions later, still stuck at 9.  They were sternly telling me it wasn't time yet.  I would tear if I pushed.  Mary left, the nurse stayed.  I was crying.  I told her that I couldn't stop it anymore.  He was pushing himself out and I needed to help.  She looked and she could definitely see his head.  But I was at 9cm.  It seemed my body wasn't going or B wasn't waiting 1 more cm.  You'd think 1 cm wouldn't matter when the head going through it was 37 cm wide, but it was apparently a slight medical concern.  This part is probably the most TMI of the post.  I'll put it indented in italics if you want to skip it.


If he had forced his way through I could've severely torn it leading to intense bleeding and possibly surgery to fix it.  And destroying the chance to have another vaginal delivery.  So in her quick thinking, she reached up and gently pushed my cervical tissue behind his head. Now I was in the clear to push him the rest of the way out.


A few pushes later and he was out.

I couldn't help feeling like a failure.  I know complications happen all the time which is why the caretakers are trained & practiced enough to adapt.  But I couldn't get over not being able to not push.  Not being strong enough.  The hospital staff sent a congratulations card with personal note from Mary & my nurses about my strength.  It might be a standard thing they write on every one, but it really made me feel better.  I still have it and I don't think I'll ever be able to throw it away.

This time only took 12 hours, so cut in half from H's labor.   Let's keep this trend up for Clark #3 hopefully coming your way in 2015.  I think I can do 6 hours.  But I'll be up for anything because next time I'm getting all the drugs!  I'm glad I did it medication free.  I know myself and I know I'd always wonder what it's like and if I could do it.  So the unknown would be a regret for me.  But now that I know, I can 100% say it is not worth it. Any future birth plans will be: get that epidural and let the the doctors be your guide. 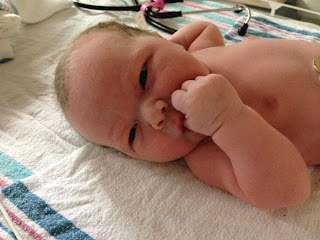 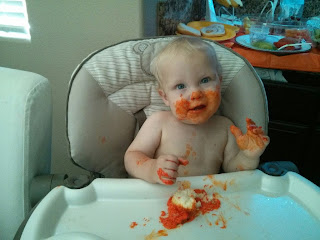