Good morning, all!  I do hope everyone enjoyed their day yesterday, and all the dads out there had a happy Father's Day!

Our little dude has been burning up lately, so our plans were on hold and changed a bit.  B woke up with a 102 fever on Saturday.  Basically the entire weekend he has been fluctuating between 101-103.8.  We've been monitoring it & giving him Tylenol.  It's not really going away, but he's not really been sick in any other way.  He had a very restless night on Saturday.  Last night he slept through, thank goodness, but he's still around 101.  It is going down though so we're still just on watch mode.  It's not worth dealing with trying to get an appointment if we're only kind of worried.

Not knowing what's exactly wrong - and if it's contagious - we've been pretty secluded.  There goes park play time, swimming at the pool, etc.  But one of the plans we had for Father's Day was getting out of the heat to picnic on Mt. Charleston.  We decided that we'd give it a shot, and it worked out nicely.  The official trails & picnic areas were crowded but we didn't need a table or a grill anyway so we found a nice spot by the side of the road. 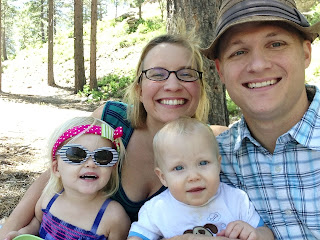 Before we left, T told H we had to get dressed because we were going on a picnic.  She ran away and returned with her little play picnic basket. 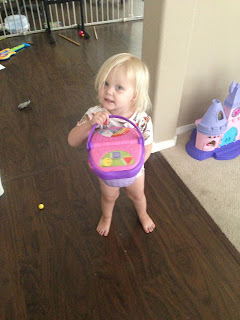 
It was in the upper 70s and the breeze felt lovely!  The sun was still as intense as it is in the valley but we stayed in the shade. The kids shared a Lunchable and we had wine and fresh, tasty snacks. 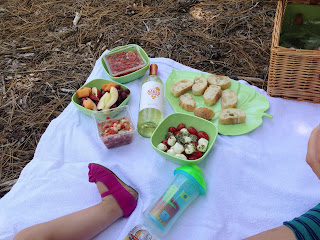 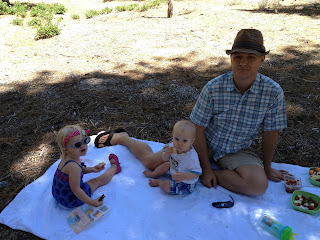 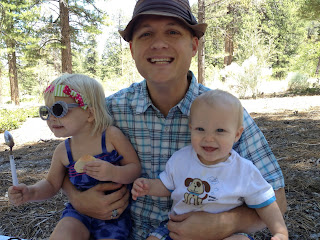 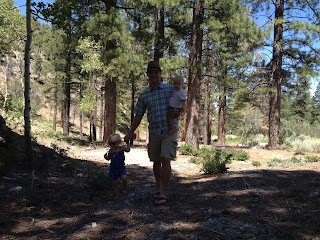 We stopped for Coldstone on the way home because it was Daddy's day and that's what he wanted.  Plus as soon as he said that ice cream sounded good, Pants took the idea & ran with it.  T wanted a shake so we let H pick out her own ice cream & mix-in and he'd share it.  All of you who are facebook friends saw the craziness that followed after she ate her cotton candy flavor with sprinkles - "I being a firetruck".