My babies are growing up.  I know it's a very obvious statement.  But it's something I know myself and my friends who are parents have to remind ourselves of sometimes.

B is starting to stand up!!  He's been pulling himself up for awhile and he just started really cruising along furniture recently.  But it was just these last couple days where he stands up, gets his balance and lets go.  He can stand for 3-5 seconds at a time totally fine.  Then he gets excited and falls down.  Or he gets over it and sets himself gently on his butt.  It's really cute. 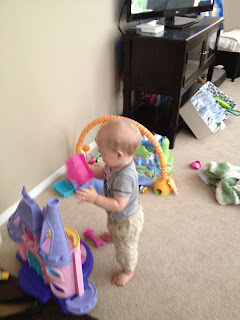 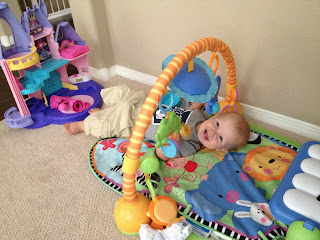 As far as H goes.  It's so hard to think she's just 2.  She definitely has her limitations and throws at least one (ha, on a good day it's only one) "terrible twos" style tantrum a day.  I think to remind me of how little she is.  Because she's so grown up.  She speaks very well for her age.  She has a memory better than her father.  Seriously, the things she holds on to.  She only really sees commercials in the evenings when we watch Jeopardy! & Wheel of Fortune.  I never even thought she was paying attention to them.  Then she saw the RC Willey logo on something and said "your home, your way".

Anyway, the other day, she got herself all set for her nap and it took me by surprise.  We were upstairs doing laundry and reading her books.  When I told her it was time to take a nap she got up, turned her light off, turned her sound machine on & said "I need my paci & sleepy time bracelet*".  I gave them to her and she climbed into bed.  Ever since then, I've been having her do all those things.  It makes going to bed a lot less of a fight.  It's not always smooth, but it seems that now that she's more directly involved she's more eager to do it.  She doesn't even use the lullaby function on her sound machine anymore.  A few nights ago I asked her if she wanted music and she said, "no.  just rains." 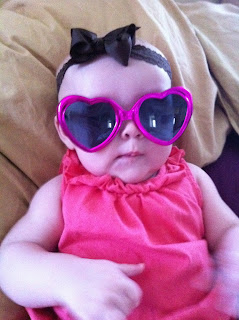 This picture has nothing to do with anything except nostalgia because look how little she used to be!!! My fancy baby girl.


*She got a little heart bracelet in her Christmas stocking that loves to sleep with. So when we transitioned her to her toddler bed, it became special and you only got to wear it in your bed.  If she got out, she had to take it off.  It was a motivational tool (read: bribe) to keep her in bed all night
Email Post
Labels: milestones pictures the babe the dude