Today is an easy one - I'm thankful for Baby B!  Today marks him being 3 months old.  I won't have as much to say about him as I did H, but he's newer and far less interesting at the moment.  I will have a teaser of the photo shoot we did yesterday, though :).

He's getting more interactive.  He is one smiley little guy.  Way more than H.  Seriously, I was pretty typically new mom neurotic with her and she was always so serious; I wondered how early you could diagnose and deal with autism.  Anyway, he's becoming pretty cool.  He even has started to laugh a bit.  It's just a tiny little chuckle, but it's cute.

It's amazing that even though the kids are only 14 months apart, it's like we have amnesia about the baby phase.  I was worried that the second time around wouldn't be as exciting, but it is.  It's still great when he grabs the rattle & reaches for the toys hanging from his playgym.  He gurgles and coos and "talks" all the time - I think he's already realizing he's going to have to be loud to keep up with his sister :). 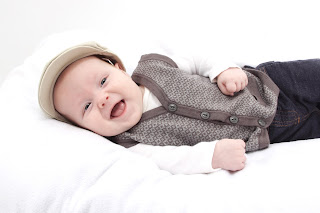 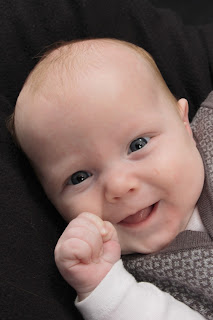